Click here to go to the school's home page 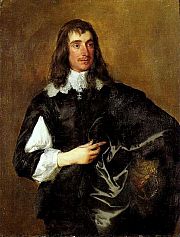 The patron of our school, Blessed William Howard, was the first Viscount of Stafford, he was martyred for his faith in the 1600s and was beatified in 1929.

William Howard was born in 1614 son of Thomas, Earl of Arundel, Grandson of Saint Philip Howard.

Raised Catholic in England in a time when the faith was in danger he married Mary Stafford in 1637. William was appointed the first Viscount of Stafford in England, Baron Stafford in 1640. Just two years later, in 1642 for political reasons he was exiled, and lived in Holland.

William undertook diplomatic missions in Flanders and Switzerland for Emperor Ferdinand. His family was impoverished when the English Parliament impounded his lands. He was arrested in Heidelberg in 1653 and Utrect in 1656 for apparently political reasons, but he was acquitted of all charges.

In 1660 his family property was reinstated, the fortunes of his family turned around, and they returned to England.  However, falsely accused of complicity in the “Popish Plot”, he was sent to the Tower of London on 25 October 1678.

Imprisoned for two years before he was even given a trial, he was condemned before the trial started. Though he had no involvement in the “Plot”, he was martyred on 29th December 1680 for being an influential, high-profile Catholic.

Click here to download a special history booklet produced by our Sixth Form students to mark the school's 50th Anniversary in 2013.